Starlink Portability feature officially available (what this means for boaters) 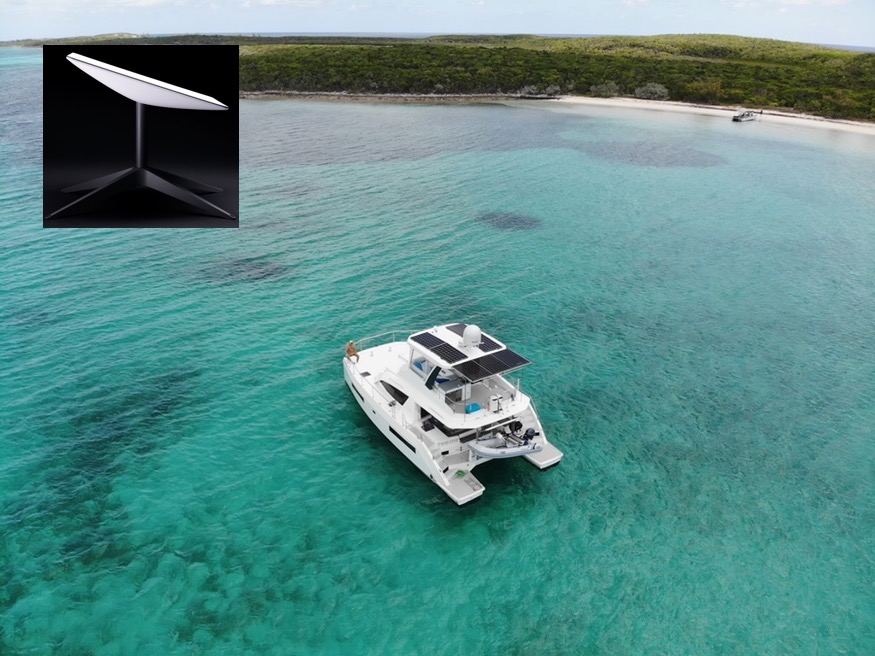 Last week, Starlink officially announced Portability as a feature along with an add-on monthly fee to enable it. Basically, portability is the same as “roaming” that many users had been using for free the last few months once it was discovered that roaming sort of worked, even though Starlink themselves never said it was a feature they were offering yet.

Prior to the announcement, “roaming” seemed to allow many users to take their terminals away from their home/registered address, set up, and connect successfully from other locations, well outside of the “cell” they lived in.  Users who wanted Starlink but lived in an area deemed “waitlisted” by Starlink also discovered they could provide a registered address in a non-waitlisted area, but ship to their home or office, and still get the system to work in their waitlisted area.   All of which was an unsupported workaround to get the terminal earlier.  There are reports of users even travelling out of country, such as into Mexico, and being able to access Starlink successfully.

With the new Portability feature, in addition to a fee to enable it, new restrictions have been added that effect some of the workarounds that boaters were using to get units.

2.) You need to initialize the unit at the registered address, then enable portability on your account, prior to taking the unit to a new location.

3.) Roaming is working for users who already had it in use prior to the announcement but will stop working on June 3rd if you don’t opt-in to paying for Portability.

4.) You can take a unit that has portability enabled into a waitlisted area, but performance and connectivity are not guaranteed at all.

5.) In active/non-waitlisted areas, units that are roaming in those areas have lower priority in the network than those who are using their systems at their registered addresses.

6.) Moving your unit to another country for more than 2 months also triggers the requirement to re-register your unit in that country.  So, for example, if you purchased, registered, and used the unit in California, you could travel into Mexico, but if you stay in Mexico for a while you will need to re-register the unit, or possibly buy a new unit in Mexico to continue service. Portability does not change the coverage available from Starlink vs. the coverage they had before the feature was announced.   As of now, the laser cross link satellite constellations are not complete, and all active users are still relying on satellites that connect to ground stations.  The ground stations must be near the user for the user to have connectivity.   And it seems that Starlink may also be locking the cells down using GPS coordinates so as to not extend service far out into the ocean (up to 12 miles possibly depending on where).

We do now have official coverage maps from Starlink that were made available as part of the announcement and which show the live and waitlisted areas globally.   Starlink actually has far less international coverage at this time than I had assumed based on online rhetoric and social media posts. As you can see in the map, there are challenging areas such as Alaska, Caribbean, and Northern Canada with no open sea service at all (since the laser cross links aren’t in use yet.  The map is highlighted with effectively four levels of status…  Active, Active but Waitlisted, Coming Soon, and nothing.

Active areas are places where you can register a service address, order the hardware, and activate service immediately.

Waitlisted areas have active service, but are already saturated with users, requiring upgrades to the ground stations and/or additional satellites before allowing additional users to start service there.

Coming Soon areas are interesting, and clearly “Coming Soon” can mean a whole lot of things.  First, any areas north of 57deg N Latitude or south of 57deg S Latitude are limited by the orbits of the first layer of satellites.   Additional satellites are being launched into different orbits which will expand coverage into the higher latitude areas.

Clicking on the map shows expansion timeframes of 2023 for most or all of the waitlisted and coming soon areas.  So, it will be a year or longer before service is available there.

The areas with no status include notable countries such as Russia, China, Cuba, and Venezuela, likely due to political, regulatory, and/or safety challenges.

Much of the future coverage depends on satellite shells 2 through 5 being deployed which is underway.  These satellites will have varying orbital inclinations (angle relative to the equator) as well as laser communication between nearby satellites (space lasers).  The combination of higher inclination orbits and the ability to route connections between satellites in space is what will enable expansion of the coverage areas as well as provide some help with network saturation, since the system could route traffic out of a congested area to a ground station elsewhere that has excess capacity.  These same upgrades will also allow for coverage over oceans and other areas where installing a ground station is difficult or impossible.  Without satellite-to-satellite communication, service is only available within about 150 miles of a ground station due to the low altitude of the satellites.

At this time, Starlink has not given any timeframes, costs, equipment requirements, or other information on a service offering for boats.   But of course, some boaters are already using it, in a largely unsupported mode and with varying levels of customization.

Moored Boats (at a dock):  A boat tied to a dock that doesn’t move is really not much different than a house, so as long as the boat is in an active or waitlisted area and has an active plan (with portability enabled if the boat is not at the registered address) then it will certainly work just fine.

Anchored Boats (mooring ball, anchor): Anchored boats tend to swing around depending on currents and winds.  In this situation, Starlink works just about the same as on a moored boat but as the boat swings the antenna may decide to readjust its angle periodically.  These readjustments can cause small outages of service.   The frequency of these readjustments and outages will vary depending on how much and how fast the boat swings on its anchor.

Inland boats underway: In-motion boats with a Starlink antenna onboard seem to be able to maintain service while sailing/motoring in inland or coastal waters that have Starlink coverage.   Coastal coverage varies depending on how close to the shore the ground stations are, but service is generally GPS restricted to no further than 12nm from shore (territorial waters).  Like anchored boats, movement of the vessel can cause the antenna to readjust and cause outages during those moments.  And in-motion antennas also seem to be getting lower performance compared with a stationary antenna, which I would expect anyway.

Offshore boats: Since there’s no coverage outside 12nm of the coast, true offshore vessels are not able to use Starlink at this time.  I expect this will change sometime late 2023 but it could longer for some areas than others due to the varying orbits of the 5 satellite shells.

IN-MOTION IS NOT SUPPORTED:  Keep in mind, the FCC does not allow in-motion use in the USA (I cannot speak to other countries rules at this time), so it is both against Starlink policy and FCC licensing rules to use a Starlink terminal in-motion on any type of vehicle even if it technically works.  While this may not stop you or others from trying it, you should still be aware of what the rules actually are at this time.  This also means that in-motion capability could be taken away at any time for no reason and without warning.

Like the additional $25/month (US) fee for portability (when roaming had been free but unsupported for several months prior) it’s highly likely that as Starlink expands and adds new capabilities such as in-motion, international roaming, space lasers, and ocean coverage, there will be additional charges and/or upgraded hardware requirements in order to continue using those features.

Installing on a Boat Because there is no official boat service currently offered by Starlink, the terminals are not set up for installation on boats and there are no out of the box mounting solutions suitable for boats either. The antennas are also IP54 rated water resistant, far below the IPX6, IPX7, IP65, IP67 ratings of most maritime equipment that is desired to handle offshore weather conditions.

That said, some people are doing it anyway using either a custom metal mount or modifying an existing antenna mount.  An appropriate solution for some boats would be to install the antenna inside an existing 24 inch or larger satellite dome (Intellian i6, KVH V7, etc.) to provide weather and wind protection.

Additionally, there has been good success for the older antennas in disabling the antenna adjustment motors and installing the antenna in a fully horizontal position (flat) permanently.  The system will complain that the motors are not working however the results seem to show performance is not impacted, and because the unit is unable to make its periodic adjustments on a moving platform, the interruptions associated with those physical adjustments go away as well.

The old round dish’s motors are generally accessible; however, the newer rectangle antenna is more sealed, and you must affect permanent damage (in the form of at least a large, drilled hole) to the unit to access the control cable to disable the motors.  This would obviously void any warranty.   Note also, that whether the change you make is permanent or temporary it’s extremely likely Starlink knows about these changes as the system is monitoring itself in all sorts of ways and reporting back to Starlink with status, alerts, errors, performance statistics, location, and more.

Integration with Onboard Networks

With the older round terminal, integrating with an onboard network was pretty easy.  You could just connect the AUX port on the Starlink Wi-Fi router to another router’s WAN or Internet port if you wanted.  And you could even remove the Starlink router entirely and connect the antenna to an alternate Wi-Fi router/firewall.

With the v3 rectangular antenna, there are no Ethernet ports in the system, it’s Wi-Fi only which makes the Integration more difficult.  The cable between the router and the antenna is also proprietary, seemingly a USB-C connection but with a modified connector.   An ethernet adapter is offered as an add-on though.

There have been some issues reported with certain applications over Starlink, but it seems inconsistent, so I don’t have any specific call outs on these at this time.  But possible in the future we will have more data on this.

Want to Learn More about Offshore Comms?  Subscribe to Marine Electronics Advisor today and get started!

Need Satellite Broadband today?  Contact us to find out which of the options available today will meet your needs, from basic satellite phones up through Viasat and Starlink!