Which Marine Radar is compatible with my…. fill in the blank? 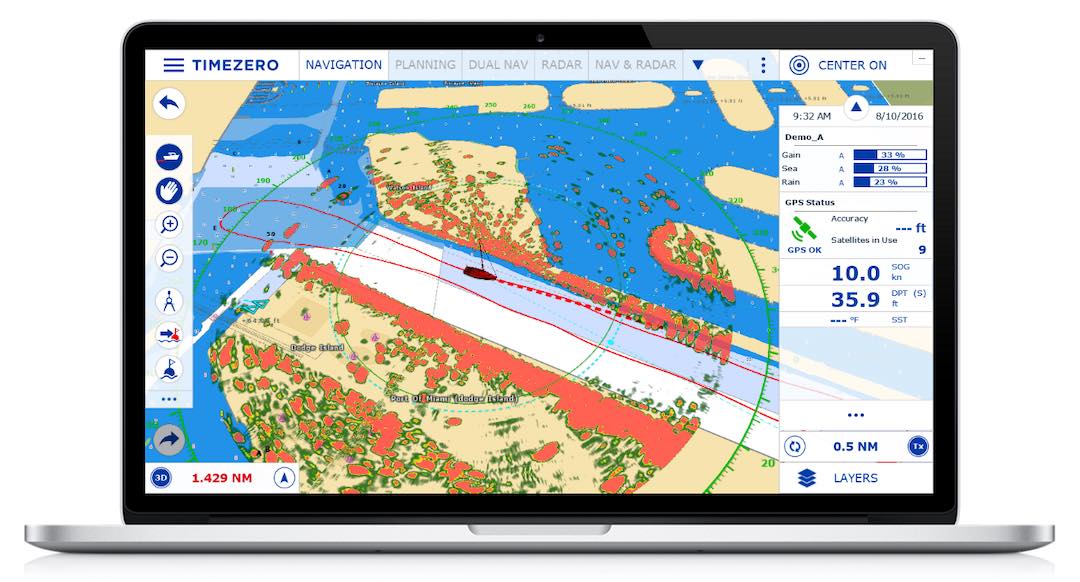 Many of my discussions with customers come around to discussing marine navigation and electronics since these are linked in some ways to communications projects.  And one of the common questions is what sort of radar they should get that will work with their chartplotter(MFD), or tablet, or OpenCPN, or TimeZero, or a Raspberry Pi.  Below is an overview of various combinations of radars and compatible computing/navigation devices.

First, at a high level, Radar is generally one of the few things on a boat that is brand name proprietary.   Raymarine radars are only designed to work with Raymarine MFDs, Garmin radars with Garmin GPSMAP, etc displays, Furuno radars with Furuno displays, and Navico/B&G/Simrad/Lowrance radars with any of those 4 (since they are all pretty much the same anyway).

In addition, old analog radars connected to the MFD display using proprietary connections with many conductors.  Modern marine radars use ethernet technology (same physical wiring and basic technology as a computer network in an office).  But in addition to a myriad of connector types used for the ethernet cables in marine networks, the data packets flowing over those cables are proprietary to the brand as well.

All that to say that if you want a radar and you want it to work with your favorite MFD/Chartplotter, you are automatically going to have to buy the radar from the same brand as your MFD.

Examples of latest combinations of MFDs and Marine Radars:

But you don’t want the standard radar and chartplotter combo….

But what if you want to do something a bit non-standard, maybe even forgo a traditional chartplotter.   Well here’s where it gets interesting, and a bit complex.  But let’s go through the options from the computing device perspective as a baseline.

Marine Radar with an Apple iPad?

Let’s say you want to use your iPad as a full Navigation system and you want radar functionality.  Well there is only one option. The Furuno FirstWatch radar is a standalone radar device that you connect to via WiFi.  The TZ iBoat app on the iPad supports full cartography, routing, waypoints, navigation, etc and can overlay the radar data it receives from the FirstWatch unit.  You can combine a WiFi AIS unit as well to bring in additional NMEA data like wind, depth, speed, and AIS target information to the TZ iBoat display.   This makes a nearly complete navigation solution with just 3 components — iPad, FirstWatch, and a WiFi enabled AIS unit like the Vesper XB8000 or Cortex).

Note, this is an iPad app, not a universal app, so it will not work on an iPhone, but you wouldn’t really want to do that anyway.

Marine Radar with a Windows PC?

For a Windows based computer we have a few more options to choose from.

Solution 2 (TimeZero): A combination of a Furuno DRS ethernet-connected Radar and Nobeltec TimeZero software for Windows. TimeZero is a full chartplotter experience on a computer with support for nearly everything a Furuno MFD can do including depth sounders, bottom mapping sonar, radar, and more.  The Radar module for TimeZero directly supports both the Furuno consumer DRS and commercial FAR series radars (Note, the DRS4W First Watch radar above is NOT supported).  In addition, TimeZero can be networked with a Furuno NavNet TZT2 MFD or it can operate on its own without an MFD. In the Open Source space we also have OpenCPN software which is a full navigation suite as well, but written by volunteers and offered for free. OpenCPN currently supports running on Windows, Linux, MacOS, and Android devices.  On any of these devices the Radar Plug In is available to control and view a compatible radar on your computer along with charts and other navigational data. Solution 4 (OpenCPN): A combination of OpenCPN software running on Windows, and one of several compatible radars from Raymarine, Garmin, or Navico/B&G/Simrad. The radar plug in can operate as a standalone system with no MFD and just a radar connected or as part of a network with a compatible MFD that may exist with the radar from the same manufacturer. All of these radars sensors have an ethernet connection that can be adapted to connect to a computer, but depending on the cabling and model, may need off-the-shelf or custom adapters.

Unfortunately OpenCPN does not currently support Apple iOS so this will not work on an iPad.

What About Marine Radar with my Raspberry Pi?

Solution 5 (OpenCPN for Raspbian): Same as Solution 4 above really but with some more specific software and any performance limitations that apply to the current model of Raspberry Pi. This sums up the high level options I know about today.  If you know of some additional interesting combination of software, computing platform, and radar sensor that a typical boater would benefit from, feel free to send that info along or comment here and we’ll add it in.

Embarking on a DIY electronics project on your boat?